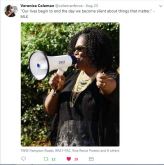 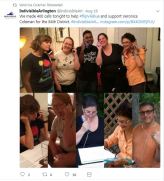 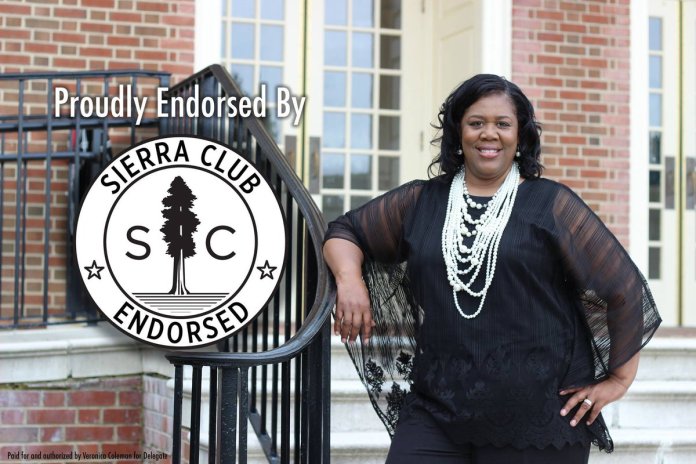 The Rev. Dr. Veronica Coleman is the Democratic candidate for Delegate in Virginia’s 84th District in Virginia Beach, Virginia. 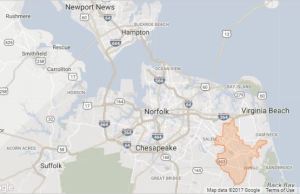 Veronica’s Story: Veronica Coleman is a wife, a mother, a pastor, a manager, and a mentor. She entered the campaign to fight for the values that matter in Virginia’s 84th District: strengthening the healthcare system, protecting the vote, and making sure that everyone benefits from a vibrant and equitable economy. “I want to spend some time listening to constituents, finding out exactly where they are on the issues,” Coleman said. “I need to hear from them and hear what really is on their mind.”
As a former healthcare executive, Dr. Coleman saw the devastation that can occur in families without access to affordable health services. As she said in a recent tweet: “Dear @SenateGOP, healthcare is not a game. You don’t get to keep playing until you win. There are real lives at stake.” She also witnessed the painful decisions that too often must be made between paying for health services or paying for food and other necessities of life. “I already serve people,” Dr. Coleman has said. “I just see this as an extension of that service.”
Bio: Dr. Coleman, whose race has been endorsed by the Sierra Club and the AFL-CIO, is the Pastor of New Jerusalem Ministries, a community focused ministry she founded in 2010. In 2015, New Jerusalem Ministries received the Model Partnership Award from the Virginia Beach City Public Schools for its programs on behalf of students. Dr. Coleman served as President of the Virginia Beach Interdenominational Ministers Conference and in leadership capacities with other civic and religious organizations. She was also a volunteer reporter and anchor for the City of Virginia Beach Television Station. She co-facilitates the Pastors and Community Roundtable designed to improve the relationship between the Virginia Beach Police Department and the community. Dr. Coleman, a native of Halifax County, VA, received her undergraduate education at Danville Community College and Averett College (University), completed graduate studies at Old Dominion Univ.and Virginia Union Univ., and earned her Doctorate of Ministry from United Theological Seminary in Dayton, Ohio.
Issues: Dr. Coleman wants to grow the Virginia economy, including by supporting small business and encouraging entrepreneurship, and raising the minimum wage to a “living wage.” She will promote a strong public education system, including early childhood programs and two years of post-high school education paid in full. Dr. Coleman believes in healthcare for all, including Medicaid expansion. Her Sierra Club-endorsed campaign is committed to fighting for policies that protect public lands and waterways and intends to introduce legislation addressing threats to the Chesapeake Bay and coastal cities. Dr. Coleman believes we must work to restore the full protections of the Voting Rights Act and end political and racial gerrymandering.
Opponent: Del. Glenn Davis, the Republican incumbent. Del. Davis loves President Trump. Del. David voted to drain money away from the public school system (HB1605), to designate the anniversary of Roe v. Wade as a “Day of Tears” (HR 268), to require reports on the locations of already at-risk refugee populations in Virginia (HB2002), to suppress the vote (HB1428, HB1598), and to repeal state laws connected to the Affordable Care Act (HB2411).
Website: http://veronicacoleman.org/
Facebook: https://www.facebook.com/coleman4va/
Twitter: https://twitter.com/colemanforva
Many thanks to the author of this “candidate story,” Estee Levine, and to all information sources cited, linked and summarized on this page.